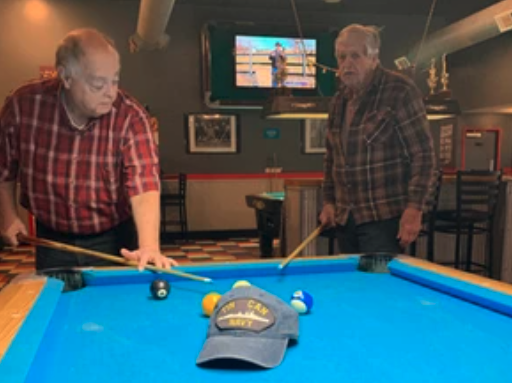 Dave Wagner, of Kirkwood, Mo., worked as a registered nurse for more than 40 years. After his long and successful career, he retired in 2018.

Dave Wagner, of Kirkwood, Mo., worked as a registered nurse for more than 40 years. After his long and successful career, he retired in 2018. However, retirement left him feeling restless, longing to contribute as he did before. Knowing this, his wife shared with him VNA’s Visit-A-Bit program, which she had heard about on the radio. Dave was interested. He called, interviewed and was selected as a Visit-A-Bit volunteer.

Dave’s first Visit-A-Bit match was with a couple in Imperial, Mo. They shared with him the feelings of isolation and invisibility they had felt for the past two years. “With this insight in mind, we’ve been running with it,” says Dave. “We’ve been getting deeper into conversation as the level of trust builds between us, and they’ve blossomed in that they are excited and enthused. The wife, Susan, said she has always been proactive and assertive but now felt able to get in contact with other people, beyond just interacting when only necessary.”

Shortly after, Dave was paired with another senior in Festus, Mo. Instead of meeting in his home, Dave met with him several times at the local Burger King, which he used to frequent with a friend. He shared how he was grateful to get outside of his house again and removed from the memories of his wife passing away in bed there. Together, Dave and he have been working through issues, and after several visits together, Dave began to notice the number of people who stopped by the table to say hello and that they missed seeing him. In an effort to get him out in society more, Dave recommended meeting up at other places, which he welcomed with the suggestion of a pool hall. They enjoyed a meal at the cafe and shot pool, one of his favorite pastimes, for the first time in many years.

In a fairly short time, Dave has seen great progress from those he has been privileged to visit. By showing genuine interest and building a relationship of trust, he encourages participants to open up, share their experiences and find ways together to step out of their comfort zone into a more fulfilling life.

“The Visit-A-Bit program gives people the chance to bring some happiness, enjoyment and interaction back into their lives,” says Dave. “People are what makes the world go around, and social interaction is essential. This can give them the confidence and willingness to re-establish bonds and be worthwhile and meaningful to other people as well as themselves.”

Volunteering with Visit-A-Bit has also benefited Dave in many ways. “It’s allowed me to continue in a career in which I can hopefully make a difference in people’s lives. It’s a labor of love rather than for a paycheck,” says Dave. “Like those I visit with, it has helped me to be more open and take more risks in my own life.”